In 2005, the Association of American Medical Colleges (AAMC) called on US medical schools to increase class size by 15% to 30% to address a projected shortage of physicians during the coming decades.

Georgia particularly felt the urgency of this impending physician shortage. According to a 2008 study commissioned by the Medical College of Georgia, the state was on the verge of a health care crisis due to a drought of physicians. It was noted that without changes in the state’s medical education system, Georgia would rank last in the United States in physicians per capita by 2020.

Morehouse School of Medicine (MSM) President Valerie Montgomery Rice recognized the state’s insufficient number of primary care physicians, including a specific lack of minority physicians, and how this negatively affected low-income areas in Georgia. As MSM has a specific commitment to train minority doctors who go on to work in underserved communities, the school stepped in to develop a plan to address this physician shortage.

Intervention for the Entire College of Medicine

The birth of “Paving the Road to 100: A Legacy of Educational Excellence” began as part of MSM’s commitment to educating and preparing future health leaders to provide medical care in underserved communities. The first step in this plan was a strategic increase in the enrolling class size from 54 students in 2012 to a goal of 100 students by 2017. The increase was planned to happen in increments of 10-12 students per year.

The goal of the family medicine clerkship was to provide continued high-quality education to this increased number of students. In order to do this, we determined that we needed to ensure recruitment of more preceptors and retention of current preceptors; the following interventions were implemented:

Figure 1 illustrates the increase in class size from 2011 to 2018, from 54 to 100 students. At the same time, Figure 2 demonstrates a fluctuating increase in the number of recruited and maintained preceptors during the period in which MSM was increasing its class size in spite of the discussed interventions. The slight decrease in CPs observed between FY 2014-2015 and FY 2017-2018 was multifactorial for reasons such as retiring preceptors, change of career paths, and compensation requests. The impact of the fluctuating CPs recruitment and retention process and its challenges in light of the increasing class size made us further discuss strategic planning involved in the birth of “Paving the Road to 100.” We needed to continuously be proactive and creative with systems to ensure we have adequate CPs while still maintaining a high-quality education for our increasing number of students in spite of unforeseen changes. These methods supported the goals to nurture well-trained future physicians and consequently closed the gap for physician shortage in Georgia. 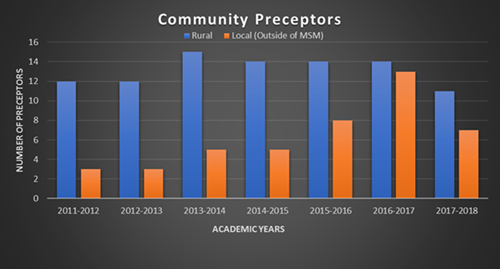 We found that while schools face short-term challenges with an increased class size, such as the need for additional learning materials, space and community preceptors, these challenges are offset by long-term gains, that include closing the gap in physician shortage. Our experience with a multifaceted approach to strategic planning, involving both organization announcements and recruitment and material incentives, could be used to assist other institutions aiming to increase their class size and subsequently needing to recruit and retain preceptors.

August 8, 2022: The Bishop Society Self-Nominations Due

August 15, 2022: The STFM Board of Directors' Self-Nominations Due

August 29, 2022: Applications for Faculty Position with Emerging Leaders Fellowship Due

September 15, 2022: Proposals to Present at the 2023 STFM Annual Spring Conference Due

October 15, 2022: Nominations for the STFM Diversity Award Due

October 21, 2022: Applications to Serve on the 2023 STFM Foundation Board of Trustees Due

October 31, 2022: Applications to Receive Funding with the STFM Project Fund Due